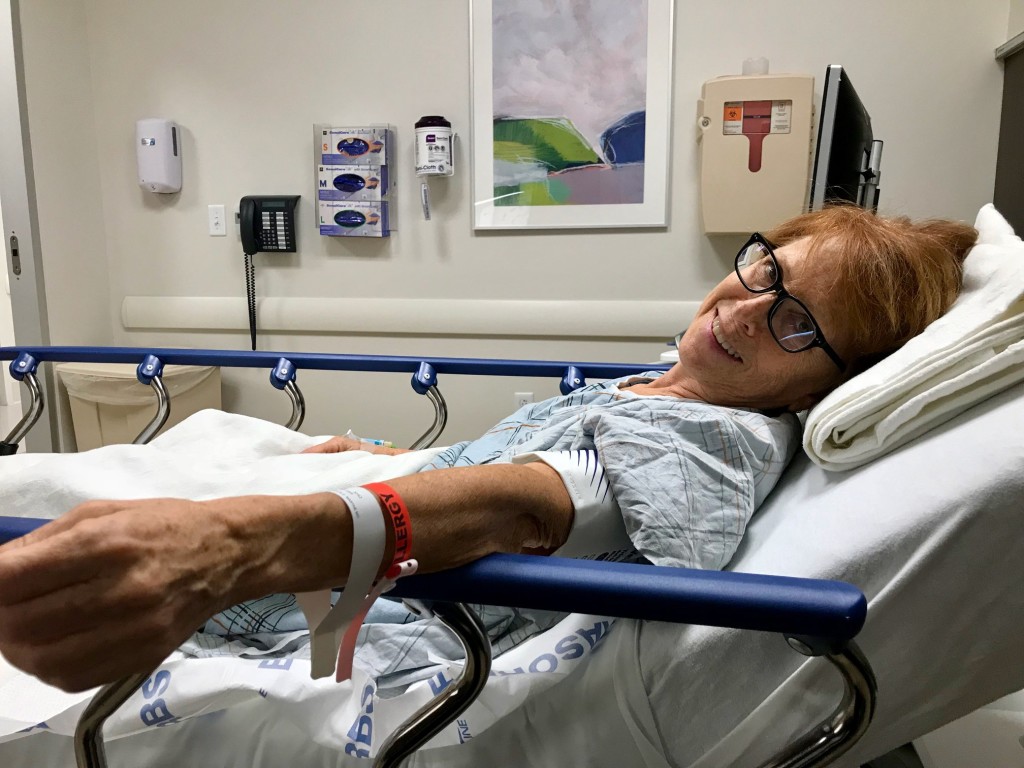 Without going into too much detail (too late), over the last several months Caryn has been experiencing some (occasional) bleeding and being the courageous sport that Caryn is, she elected to have a colonoscopy. Many mature adults elect to have a colonoscopy as a precautionary measure for the early detection of colon cancer — or — if one is experiencing pain, discomfort, bleeding (etc.) caused by what they think might be hemorrhoids. I’m an immature adult so I haven’t gone through it yet. And after being on the supporting end (sorry) twice with Caryn, who went through the procedure (again) today, I think the most painful part for me (both times) was watching her drink the colon prep— that gallon of radiator flush one must consume while fasting for twenty-four hours. Quelle horreur! So, the day after the biggest November snowstorm in NYC since before the last civil war— we went to Mt. Sinai West, the hospital on the UWS where God gets Her colonoscopies. Doctors who do colonoscopies sometimes do as many as twenty a day and Caryn’s doctor was one such pro— she was scheduled to do six today… “A light day” by her standards. Any rate, Caryn’s colon was in good hands with Dr. Pascale White, and she took Caryn into the procedure anaesthetized, and brought her back hungry. The diagnosis: “Anus Impeccabus!” She’s clean! No cancer. Just hemorrhoids. Loopy from the anesthetic, which might be why she laughed at my subsequent barrage of colon jokes, we went to our favorite restaurant for celebrating good news, Candle Cafe West, and we chewed every single bite thirty-two times. Me too. Because, in solidarity with Caryn, I didn’t eat for 24 hours, either. And I want to tell you, tofu never tasted so good. And life never seemed so beautiful. And afterwards, on the walk to the subway, it stopped raining, and the sun was out. During the train ride home, a violinist got on at one of the stops and started playing Henry Mancini’s “Love Theme” to Zeffirelli’s ‘Romeo and Juliet’, and while Caryn dozed, I was remembering that this wasn’t our first November trip to Mt. Sinai. Over the last past 11-ish years we’ve been there a few other times. Mt. Sinai (east) was one of the hospitals Caryn was treated for advanced ovarian cancer. Mt Sinai is where she went for her final surgery, the one that removed the residual mass from behind her intestines, the one that saved her life. I remember one Thanksgiving, not long after that final surgery, when she was undergoing chemotherapy, we were about to head over to Caryn’s relatives in White Plains for a big Thanksgiving feast. And right when we were about to load the vegan dishes we made to contribute to the potluck, we got a call from one of Caryn’s many doctors telling her that her blood work was in and her platelets were dramatically low, so, we needed to go (STAT) to Mt. Sinai and get a blood transfusion. Yeah, we spent that Thanksgiving weekend in the emergency room. I was also thinking about how I’ve seen Caryn in a hospital gown with needles in her arms, wires glued to her chest, with one of those tacky bracelets one too many times. But, I thought those days were long gone. So, today, when I saw it again, I wasn’t ready for it, “I thought a colonoscopy was just a routine thing, like going to the dentist and getting drilled: a little novocain, a little cleaning, and were done”, I thought. “I had no idea they were going to be making her sign forms, prepping us “just in case”. “Wait, what? I’m your proxy? Hey, how serious is this shit (sorry)?” I guess I got a little freaked out. I may have even wanted to grab the guys violin and smash it while shouting, “I hate that dumb song! Stop playing it! Stop playing it!” But I didn’t. And who knows if it would’ve been the right thing to do? I certainly don’t, do you? All I can say is, Go with your gut, not your butt…unless it hurts then get a colonoscopy. Congratulations Caryn Beth Hartglass. You are very brave. Love you madly.