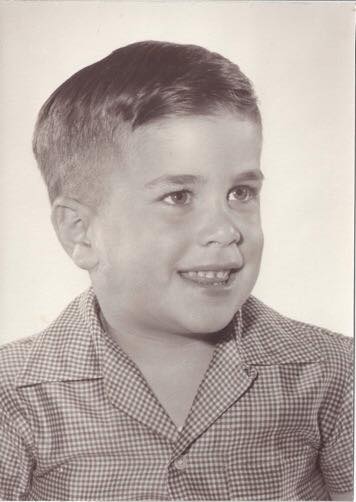 I’m not religious. I attended Catholic school from first through third grades. The picture of God on the classroom wall was a caricature of an old white man with a white beard who resembled an Al Hirschfeld self-portrait. The picture opposite Him was of His Son, Jesus. The picture of Jesus looked a lot like a distant relative I’d see at family gatherings when I was a kid; the one that my dad would call, “That Long-Haired Freak!” This past Christmas we celebrated Jesus’ birthday by attending a midnight mass of a George Lucas knock-off.

One day in first grade religion class the nun, Sister Mary Larry, taught us the story of how Jesus’ mom, Holy Mary, was pregnant with Jesus. She also told us that Mary was a virgin.

I raised my hand and said, “You’re kidding, right?”

And Sister Larry said, “Don’t speak out in class!”

“Yes Sister…but I raised my hand.”

“Raising your hand is step one of a three-step process. Step two is to wait for me to recognize you. And step three is for you to wait for me to call upon you to speak. Now sit down and shut up.” In those days a teacher could tell a kid to shut up especially if she was married to Jesus.

I wasn’t embarrassed by my classmates laughter…I was inspired.

Sister Larry continued telling her story about Mary having an “immaculate contraception”.

I couldn’t take it anymore so I stood up without being called on and said, “Don’t you mean “conception”?”

“This is not possible!” I barked back.

And then I walked up to the front of the class and gave several logical and rational reasons why Holy Mary could not have been made pregnant by a Hirschfeld drawing. I also included a visual aid on the chalkboard of a single sperm fertilizing a single egg. I spoke in a clear calm voice—

“Your dad puts his penis in your mom’s vagina and he squirts sperm into your mom and that fertilizes her egg. And this is how babies are made. This even includes you Sister Mary Larry!”

My classmates stopped laughing and started screaming and crying at the thought of their parents fertilizing each other. And I was immediately sent to the big man’s office.

Sister Mary Five O’Clock Shadow was the warden of the “Saint School” I attended. One of her jobs was to lead the school in prayer every morning out in the schoolyard. She must’ve worked for the post office before becoming a nun because it didn’t matter if it was raining, or snowing, or if the hot California sun was beating down on our pointy little heads, she’d make us stand there at attention and deliver the mail up to heaven.

Every day during morning prayer I’d hear the sound of the metal clips clanging against the tetherball poles and I remember thinking, Nothing is more depressing than the sound of a tether without its balls.

When Sister Mary Five O’Clock Shadow was satisfied that we’d prayed until our brains bled, she’d lift a brass bell the size and weight of Thor’s hammer and ring the crap out of it. That was our cue to march off to class to keep on praying.

In the three years I attended Catholic school I received an excellent education in reading, writing and arithmetic overshadowed with unsubstantiated stories about fathers, sons and holy ghosts. When my parents pulled my sister and I out of Catholic School and put us in public school, I was several grades ahead of the other kids in my class in prayer memorization but way behind in dodge ball.

Another of Sister Mary Five O’Clock Shadow’s jobs was to revoke exercise yard privileges if we were bad. Apparently speaking out in class was considered very bad and so that meant she’d have to administer corporal punishment too. I’ll never forget when she sat me down in her office— she closed the door behind her, rolled up both of the black sleeves of her suffocating Habit exposing the tattoo of an anchor on her left forearm, grabbed a yard stick, and whacked me on the back of my head.

“Okay you little piece of shit, why is it so difficult for you to keep your god damn mouth shut in religion class!”

“Well, Sister, it’s inconceivable to me that Holy Mary could conceive a child without having intercourse with Holy Joe.”

And then she said as she whacked me again, “How does someone so young know about intercourse?”

“Sister, haven’t you ever seen the movie Auntie Mame starring Rosalind Russle based on the play of the same title by Patrick Dennis? There’s the scene when Mr. Babcock discovers Young Patrick hasn’t been enrolled in the Bixby School as he had originally ordered. Instead, Patrick has been enrolled in a progressive school downtown. And when Babcock walks in to the classroom after looking all over New York City for him— he finally finds Patrick and he brings him back to Auntie Mame and he says, ‘There they were, a schoolroom full of them: boys, girls, teachers, romping around stark naked, bare as the day they were born.’ And then he asks Patrick to tell Mame what they were doing and Patrick has this great monologue that I’ve memorized that I’d now like to do for you: ‘Well, we do it right after yogurt time. Mrs. Page and all the girls crouch down on the floor under the sun lamps. And they pretend to be lady fishes, depositing their eggs in the sand. Then Mr. Page and all the boys do what gentlemen fish do.’ And then Auntie Mame says, ‘What could be more wholesome or natural?’
Well, I didn’t understand all of this fertilizing at first, so I looked it up in the medical books at the public library and connected the dots. That’s how I know it’s scientifically impossible for a woman to get pregnant without a man’s sperm.” Then without missing a beat I brushed my little hand over her huge jaw, which by now had dropped to the floor, and asked, “Do you use a safety razor or do you prefer an electric?” That question cost me four recesses, ten Hail Marys, and a hotdog lunch. Giving a science lecture in religion class cost me a week banging the chalk-dust out of hundreds of erasers after school. Watching Auntie Mame with my Mom whenever it was on TV— priceless.