I celebrate Veterans Day because my dad would want me to, and he’d want me to keep telling his story.

Dad served in the infantry during World War II, in the Philippines. He was 17 when he went over there. He came back about three years later, his youth and innocence gone forever. He lived with the war until February 13, 2019 — that was the day he died. He was 93.

A rare occasion was getting dad to talk about anything else. His stories were a way for him to deal with his memories. The shadow of being trained for many weeks to kill other human beings never left his side. Neither did a handgun. He was always packing heat. “Kill or be killed, that’s what they teach you.” he’d say.
When you’re taught to kill in the name of country it’s called patriotism. When you come home and can’t ever think about anything else it’s called PTSD. Power has names and acronyms for many things.
If you don’t know how to deal with the pain of war, and you don’t have loved ones to tell your stories to, or to help you through the nightmares, are you broken? You might find yourselves alone, on the streets, unemployable. No place to live. Funding cuts. Power calls you, “Homeless”— apparently you’re a serious problem that needs to be dealt with when you belong to that organization: Phi Beta Homelessness.

During his time over there he saw a lot of what people in power like to call “action”.

“We’d be aboard ship— all lined up, and then they’d drop the nets and we’d climb down and jump into the Higgins boats, they were the boats that were waiting down there to take us to the beachheads…to be used as friggin’ sandbags. Some of the guys never made it in the boats, they’d get caught in the nets and break their friggin’ necks so right there you knew you were fucked. Many guys shit their pants or threw up in their helmets when we got in those friggin’ boats. Then we’d get close to the shore and the ramp would drop and we’d have to swim to the the beach if that friggin’ boat driver didn’t get close enough. He was scared too, he wanted our asses off the boat so he could get the hell out of there! You can’t blame him. They’d pick us off like ducks wading in the water…I hit many beachheads: Lety, Luzon, Guadalcanal, Baguio…I got malaria, dingy fever, shot through the ankle…we carried guys bleeding on our backs through the jungle…when we got them to the medics they were dead, poor bastards…I was good at digging foxholes, I kept digging and digging and digging until I hit friggin’ water… I carried a BAR: Browning Automatic Rifle, big fucking gun, I always had extra clips…lots of grenades too…and phosphorous grenades, you had to be careful with those son-of-a-bitches, don’t step in phosphorous, it’d burn right through your boot…I always had to walk point…see that scar?…a sniper just missed me, knocked my helmet right off, that fucker is still traveling…”

Dad knew war was insanity. But people in power wage war on their own people. Propaganda. Corruption. Power. Some boys and girls are expendable in the eyes of power. 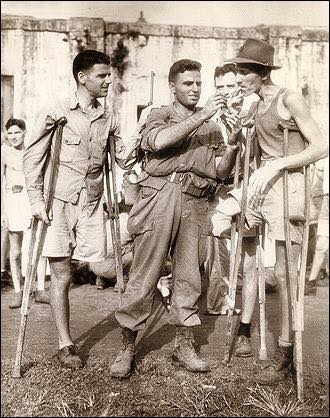 I just got off the phone with the soldier in the middle, the one with the grenades in his shirt causing it to sag, and the grenades in his pockets causing them to bulge. He’s the one lighting the cigarettes of the American POW’s he just helped to liberate from Bilibid Prison, Philippines, during WWII. Right before the picture was snapped by an Associated Press photographer, that Soldier was looking for his helmet, which he lost in a firefight. He’s the same guy that went overseas when he was 17 and didn’t come home until he was 20. He carried a Browning Automatic Rifle, which weighed a lot and also meant he had to walk point…all the time. He was wounded and received a purple heart, some other medals that used to be on his dress uniform that smelled like mothballs that I’d wear as a kid. “Dad, what are those little bars with the bumps?” “Those represent all the beachheads I hit.” He got malaria, dingy fever, and many traumatic memories. When I spoke to the now 93-year-old, the war was as fresh in his memory as if it had been yesterday. He said, “Yeah, but I need to forget about it, right?” And I said, “Dad, you’re 93, for fuck sake, I think it’s possible you will probably never forget.” With old Bone Spurs in office, and a Constitutional crisis right around the corner, now more than ever we the people of the United States of America must also never forget the sacrifices that our members of the armed services have made (and continue to make) to protect and defend *it*. The other thing he asked me was, “Did you post my picture on Facebook?” Can you believe that? The first year I didn’t post his photo he asks me if I posted his photo. Any rate, he has macular degeneration, so even if he was on Facebook he wouldn’t be able to see his photo but he likes to know it’s there just the same. Happy Veterans Day, Dad. At ease, Soldier, I posted your photo. Love you.