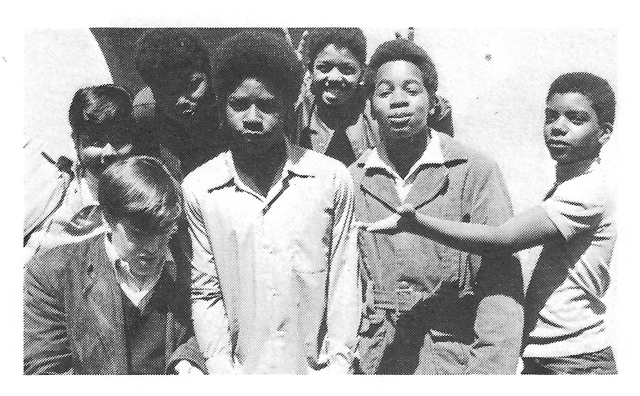 Julian Bond
At the public schools I attended in Northern California we studied the Civil Rights movement at a very early age, which meant we studied Julian Bond at a very early age. Anti Vietnam War protests would occur on the campuses where I attended school. The Revolution wasn’t happening around us, it was happening because of us. This photo was taken while I was in Junior High. In this photo I’m with my friends. During this time my friends and I would often be found cutting class and hanging out at the Student Union at the local State College where, more often than not, before heading to the listening rooms to hear the latest album by Hendrix or Cream, we’d stop and listen to activists like Angela Davis and Julian Bond speak to thousands of college kids who were holding signs that said, “STRIKE!” I hated the war in Vietnam. I hated racism. I hated white people. Then one day someone brought to my attention that I was white. They left a note in my locker stating this fact, “Gary, you’re not black, you’re white.” I said to myself, “I am?” I took the note to my friends and asked them if this was true and they said, “Uh…probably.” I was heartbroken. I truly did not want to be white. From an early age I saw that my friends and I were united against apartheid even before we knew what the word meant. Yet, for all the progressive thinking and diversity that ran rampant among us, we also learned the rest of the world was not so hip. Unfortunately, that’s still true today. I loved Julian Bond. I found comfort in his words. While growing up I knew that if there were people like him in the world then one day I could go to a party and not have the hostess feel uncomfortable because I was the only white guy in the room singing at the top of his lungs (albeit badly) to the latest Brothers Johnson tune on the record player. Thankfully my friends would always come to my rescue and say, “No, he’s cool. Don’t kick his ass. He’ll just cry. He thinks he’s black. And we don’t have the heart to tell him he’s not.” Because of the amazing public schools my friends and I attended, we learned a long time ago that “race is a construct”. We learned that there is only one race: The Human Race. Too bad the rest of the world didn’t go to the schools we attended. For me, the passing of Julian Bond marks a sad day for the human race. Somewhere in the world it’s probably still not okay with some for a white guy to say that Julian Bond was one of his heroes…but I’m going to say it anyway, ‘Julian Bond was one of my heroes…still is.’ Peace and love to you, Mr. Bond.’