Marry Me The Musical

Gary De Mattei sings “Annul It” from Marry Me, The Musical

You are listening to me sing “Annul It”, an original song by The Korb Brothers written for the character, Ben Brish, a role I played for the concept album and The New York Musical Theatre Festival (NYMF) 2011 staged-reading production of Marry Me, The Musical. Also, singing the role of Duane Bean (“Bean”) on this tune is, Mitchell Jarvis, who starred in Rock of Ages on Broadway. If you want to learn more about The Korb Brother’s and/or Marry Me, The Musical, just click on the above logo and you’ll be connected to the show’s website. To stop listening to Mitch and I sing “Annul It” just press the pause button on the player above the logo.

“Annul It” in rehearsal at Pearl Studios in Manhattan for the 2011 NYMF production of Marry Me, The Musical. The role of Duane Bean is played by Alex Brightman and that’s me wearing the same scarf Liza wore in New York, New York. Off camera the back up singers and the band are Darren Korb, and Dana Haynes. Oh, and that’s the talented Logan Cunningham at the production table behind Alex and I. Dan Korb is shooting the video.

While rehearsing Merry Me, The Musical at Pearl Studios in Manhattan, a few of us in the cast and creative team originating from San Jose had a surprise visit from another native San Josean also working in New York, Chelsea Stock, who at the time this photo was taken just closed The Little Mermaid on Broadway playing the role of Ariel, and was about to go into Sister Act on Broadway, and in 2016 Chelsea was in the Something Rotten on Broadway. Pictured next to Chelsea is Dennis O’Bannion who has also peformed on Broadway in a recent production of White Christmas; I had never crossed paths with Dennis before and yet it felt like I’d known him forever because we have so many mutual acquaintances from San Jose in common; like Chelsea, Nick, Alex, Darren and Dan. Next to Dennis is Nick Spangler who was also in the NYMF cast playing the role of Neil Ferris. At the time this photo was taken, Nick was performing in The Book of Mormon on Broadway. Then that’s me doing my Jack Nicholson in The Shining imitation next to Alex Brightman, who has also performed on Broadway in Wicked, Big Fish, Mathilda, and is currently starring in School of Rock at the Winter Garden Theatre. I directed Nick, Alex and Chelsea in theatre productions in San Jose — in addition to The Korb Brothers (Dan and Darren) — when they were just kids performing with Children’s Musical Theatre. What a joy it was for me to work with them again and to finally meet Dennis and to bump into Chelsea. We even bumped into Hugh Jackman who just so happened to be rehearsing directly across the hall from us for his show, Hugh Jackman, Back On Broadway. 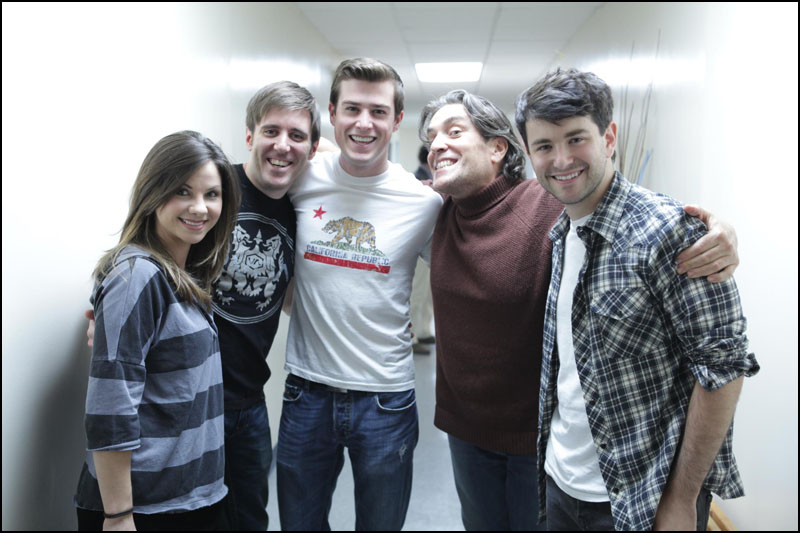