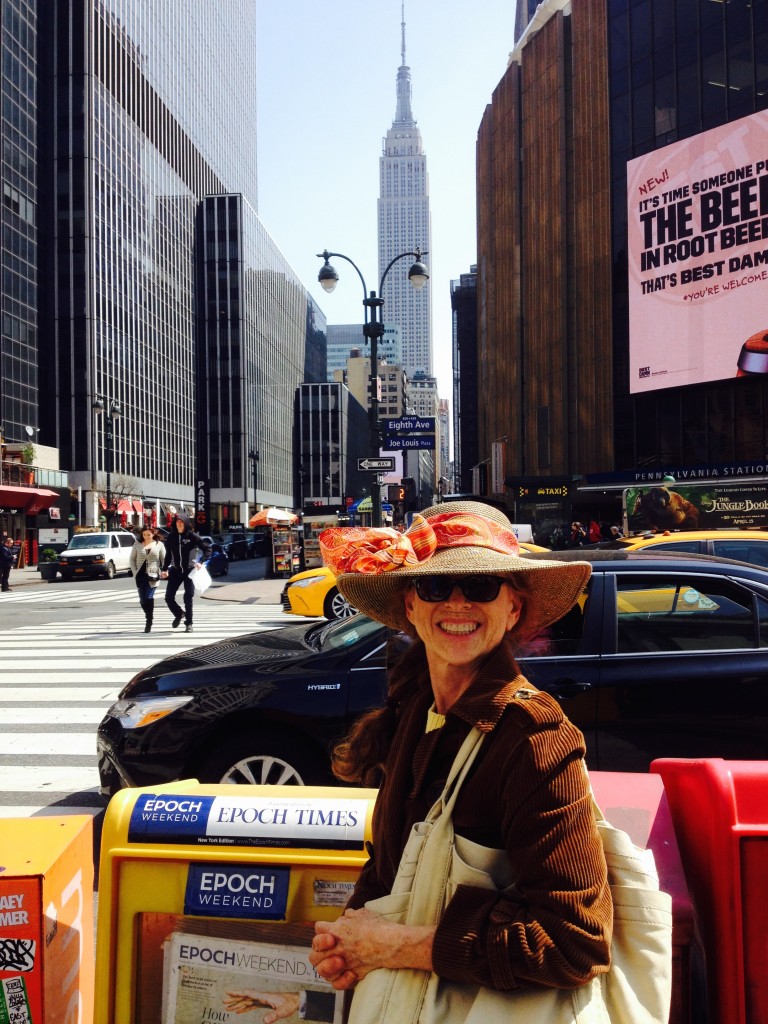 It was one of those March days Dickens wrote about, “when the sun shines hot and the wind blows cold: when it is summer in the light, and winter in the shade.” There were lots of Easter Bonnets being blown about. Smiling Manhattanites in boaters and bowties mixing in with the sad-faced men and women who do all of the heavy lifting behind the scenes. A note to tourists: Many of the frowns you see in Manhattan live on a landmass surrounded by water across the 59th Street Bridge called Queens. You probably know it as that place you have to drive through after landing at JFK. Queens houses four million people, many of whom work in Manhattan. I call Queens “backstage”. We’ve all peeked “backstage” while visiting our favorite amusement park and caught a glimpse of one of the fuzzy costumed cartoon characters headless and having a smoke. April 2016 will be my eighth year living in Queens after spending most of my life in Northern California. When I ride the E Train home to Queens from a day in Manhattan all of the smiles get off at Lexington and 53rd and trade places with frowns wearing dusty steel-toed boots, or cheaply made black hightop athletic shoes covered with bits of restaurant food and bleach, or nannies in Nikes making frantic calls between WiFi stops to their own children about how their homework better be done when they get home. On my daily jog through the streets of Queens I count as many frowns as steps. If a mile is over five thousand feet and four miles is over twenty thousand feet then that’s about as many frowns as I count as I run through my neighborhood everyday. I didn’t jog on Easter, I went to the theater and listened to the words of Harold Pinter. Pinter puts me in a happy mood. I wanted to avoid the frowns of Queens yesterday so I didn’t jog, and I didn’t look in the mirror, and I did not take the subway. I pretended I was wealthy and healthy so we took the Long Island Railroad which is three times the price but it was a Sunday and it was a holiday so the tickets were only twice as much as a subway swipe and I knew we were going to walk about twenty blocks from Penn Station to the theater so I thought that could maybe make up for me not jogging. On a good day the subway from Forest Hills to Manhattan takes about 35 minutes. This underground ride of frowns is reduced to about a nine-minute ride of smiles if you catch the LIRR express from the Forest Hills Station. If you don’t catch the express it’s only two stops and that’s still only about a twelve-minute ride so either way it’s a wonderful way to travel to Manhattan from Queens. When we got on the train yesterday and heard, “Next stop, Penn Station!” Caryn looked over at me with her smile that can melt marble and she said, “It’s an express!” We had such a wonderful day hearing Pinter’s poetry and going to the Strand Bookstore and eating at a vegan restaurant and smiling like tourists as we walked in the March sun that feels so very cold in the shade. After hearing Pinter’s words I felt invincible so I dropped my guard and suggested we could handle the thirty-nine minute subway ride back to Queens. Caryn agreed so we left the restaurant in Manhattan at 5:30 PM and walked through our apartment door in Queens at about 8:00 PM. Somewhere between Union Square and 67th Avenue we lost about two and a half hours of our lives and I found my frown. The recorded voice heard over the subway intercom said the delay was due to construction…and an earlier incident at another station…and he apologized for any inconveniences and his voice sounded just like the guy’s voice over the intercom of one of my favorite amusement parks. As we were stuck in the subway I covered my face with a scarf. I didn’t want Caryn to see my frown or hear my mumbling. At one point when I looked at her my blood pressure dropped and I thought about the words to a Pinter poem that I heard yesterday called To My Wife. Another note to tourists: Caryn and I aren’t married but we are committed to one another for better or for worse for the rest of our lives. How else do you explain Caryn wrapping a scarf around her face in solidarity with me regarding my disdain for riding the subway on the weekends during construction? And now Pinter’s words about the love of his life:

I blindly died
You took my hand

You watched me die
And found my life

You were my life
When I was dead

You are my life
And so I live