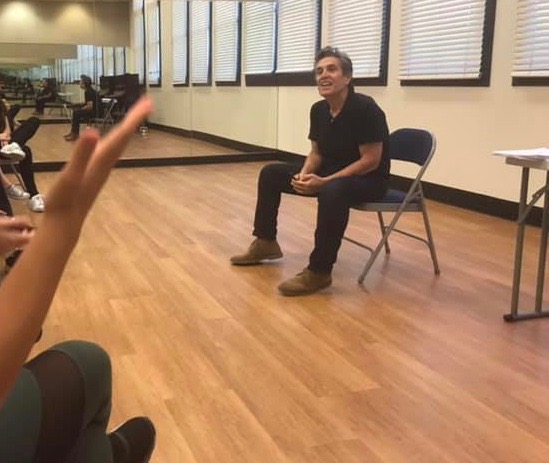 What is a calling?

Alright, I’ll bite. A calling is something you’re willing to sacrifice everything for.

What else? Dig deeper.

Wait, how old are you?

Twelve! How’d you get in this class?

In other words, you don’t look at the pursuit of your true calling as a sacrifice.

People who think they know better than you about what makes your heart beat faster.

People who think they know better than you about what you’re willing to do for love.

(mockingly) “What I did for love…”

Hey, that’s Marvin Hamlisch, he was no cliché.

Yeah, people get in the way of what you love.

Dogma gets in the way.

Political dogma gets in the way.

Religious dogma gets in the way.

Money dogma gets in the way, Dog!

Existence gets in the way.

I don’t think so.

I think existence is the reason you have a calling.

Otherwise…you wouldn’t have a phone.

You wouldn’t be here.

I think therefore I am.

I’m hungry therefore I am going to have to put my calling on hold, get a job so I can eat! Thank you common sense.

But while you are here what else should you do?

Well, like the other cliché, you should seize the day, right?

What do you think?

So, what you’re telling us is, If you don’t live in pursuit of your calling you are not living your best life.

Well, this is an acting class…

There’s bound to be some drama…

Fear gets in the way.

Anger gets in the way.

Frustration gets in the way.

Hate gets in the way.

Jealousy gets in the way.

What cancels all of those out?

Following what you love doesn’t necessarily mean life is going to be easy or that you’re going to be happy or successful. It’s doesn’t mean you’re not going to have to work at a job you dislike to do the things you love. It means that if you don’t do whatever you love you never really understand all of the things that make you tick.

How old are you?

Staying focused is the objective.

We know, we know, “Rid yourself of outside opinion.”

So, if life is not livable without the pursuit of your so-called calling, what about all of the people who put their calling on hold to —

Work a job they hate.

Maybe raising a family, helping others, working at a job they dislike but are needed at is their true calling.

Maybe sacrificing themselves for others is their true calling.

Wait, isn’t that called being a martyr?

No, it’s called being my grandma.

Your calling isn’t a who it’s a what.

What do you love to do?

Always thinking about your stomach.

You’re entitled to your feelings.

Hey, I was spitballing here!

So, if you don’t follow your true calling all of life is just one distraction after the next until the day that you are face to face with the person in the starched white lab coat with the spot of blood on it, who sits up on the exam table, wrinkling the nice neat sheet of tissue paper, dangling their feet all cavalier, and tells you that you have six months to live. And then cynicism moves in and eats the rest of you away until you, who are nothing more than an insignificant spec of dust to begin with, blows away with the wind.

And you are filled with one great regret—

That you didn’t answer the call…

Yeah, you let it go into voice mail.

Or you thought it was Potential Spam.