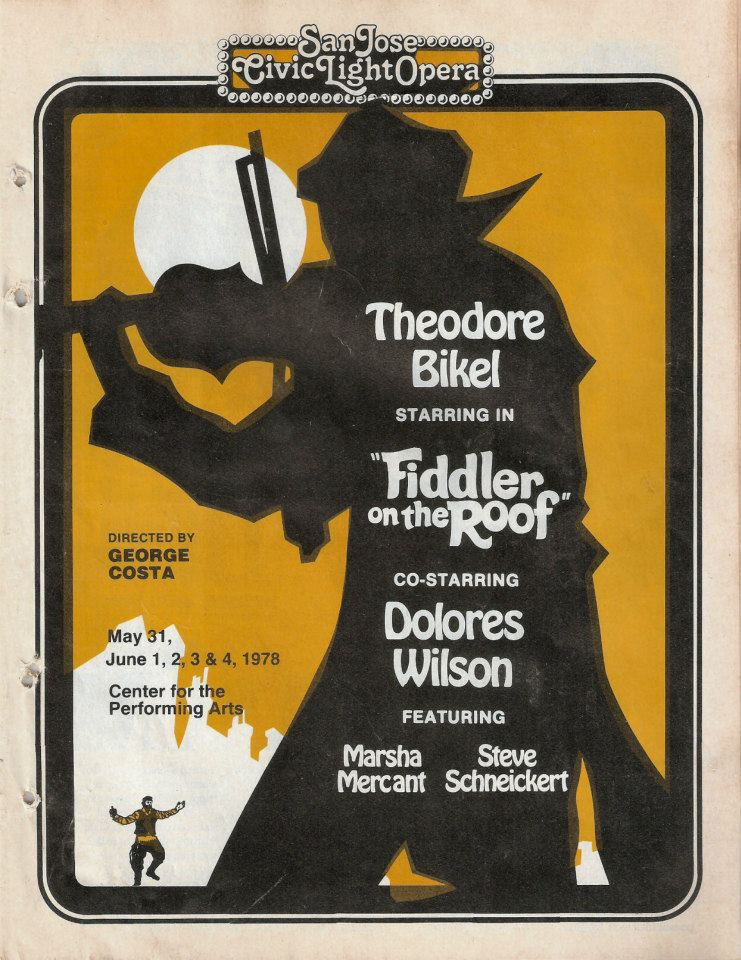 I don’t think he was aware of it but the fact remains that Mr. Bikel was one of my greatest teachers. The word “Teacher” in Hebrew is Rabbi. Thank you, Rabbi. Rest in peace.

So, there I was, doing the Russian Soloist in Fiddler On The Roof starring the president of Actors Equity Association (at the time), Theodore Bikel, as Tevye, for San Jose Civic Light Opera, circa 1978. Well, the show sold out long before we opened. Suffice it to say it was a huge success. Theodore Bikel was amazing to work with. His Tevye is legendary and he’s a brilliant actor. I learned so much watching him work. I also heard some great theatre stories about his time on The Great White Way. I wonder if he ever tells this one about little old San Jose:

It was a two-show day and we were doing the evening show. As I mentioned, I played the soloist who stands on a table during “To Life” and hits a high G stopping the joyous Jewish drinking song to sing a Russian drinking song, “Za va, shas da rovia, heaven bless you both nasdrovia to your health and may we live together in peace!” My solo went on a little longer and then we all dance and are one big happy village living together in peace until the end of Act I when the Constable and his band of Russian thugs crash Tzeitel’s wedding.

This is the way the first act curtain is supposed to go down:
The Constable enters the stage with all of us Russian wedding crashers backing him up. He walks up to Tevye and says, “I’m sorry…but the orders are for tonight. For the entire village. (To the musicians) Play! Play!” The musicians begrudgingly start playing and we Russians start busting stuff. I was blocked to toss some chairs and turn over some tables. My final act of destruction was to pick up the sacred wedding candlesticks and throw them down one at a time. When I start to do the second candlestick, the Constable stops me by blocking my throw, saying, “Enough! Enough!” He signals for all of us Russians to leave and Tevye gives The Constable this look of heartbreak. Then the Constable leaves and the Act I curtain comes down with Tevye looking up at God asking Him, “Why?” Very powerful stuff, right?

Here’s the way the first act curtain of that second show actually went down:
We are waiting in the wings to go crash Tzeitel’s wedding, just like we did at the matinee. I’m supposed to enter the stage with the actor that plays the Constable. It’s time to go and the Constable is nowhere to be found. I look over at my best friend who is also playing a Russian, the late great Jeff Lane, and I say, “Jeff, where’s the Constable?” Jeff says, “Holy Shit, he’s not here?” I say, “What the f*&^ are we going to do?” He says, “You’ve got to do it, Gary! You’ve got to say the Constable’s lines.” So just as we’re walking on stage I say, “Okay, I’ll do it.” I walk up to the President of Actors Equity, Theodore Bikel, who also happens to be the original Captain Von Trapp in the Sound of Music, the very same Sound of Music that starred Mary Martin, not to mention at this particular moment he is playing Tevye. But wait, he’s not just playing Tevye, he IS Tevye. He is one of the greatest Tevyes ever to play the role. He’d been God’s second choice to play Tevye after Zero Mostel, I’m certain of it. And he turns to see us little Russians coming on stage expecting a very large man wearing an even larger fur hat and instead he sees me. Needless to say, the fear in his eyes has suddenly become very real.

So, the next thing that comes out of my mouth are the lines of a Constable ten feet tall, “I’M SORRY TEVYE, BUT THE ORDERS WERE FOR TONIGHT, FOR THE ENTIRE VILLAGE!” I sounded like the Hulk. And then I look at the musicians who aren’t pretending to be scared, they are scared for real, and I yell again in this epic baritone voice, “PLAY! PLAY!” And we Russians bust up the place like it’s never been busted up before. In the midst of all of this I start making my way over to the candlesticks. I’m in slow motion now and I grab the first candlestick and I throw it down. I pick up the second candlestick and I’m about to throw it down, but remember— I’m not supposed to ever get that far because the Constable is supposed to stop me. What do I do? (Wait for it) I stop myself. As a “method” actor “in the moment” I have a sudden burst of compassion for the poor Jewish man who’s trying to have a nice wedding for his daughter and so I toss him an itty-bitty-bit-of-pity and I say, “Eh!” And then I turn around to my fellow Russians, and again, in this voice like the Giant in Into The Woods I say, “ENOUGH! ENOUGH!” I swing around and look at Theodore Bikel who is right with me and we give each other “the look.” Then I go off stage and collapse in Jeff Lane’s arms. We both start screaming, in a very soft stage whisper type scream, “OH MY GOD OH MY GOD WHAT JUST F*&^ING HAPPENED? I said, “Oh, shit Jeff, I’m a dead man, I’m never going to work in this business again, the President of Actors Equity is going to put my picture up on every AEA office wall in the country, like the post office does with wanted criminals.” And Jeff is laughing so hard he’s crying. Then I hear the voice of God, “GARY!” I turn around and it’s Theodore Bikel. I walk up to Mr. Bikel with my head bowed low and he gives me a little tuck under the chin with his massive hand. He looks me right in the eyes and he says, “That was very good. Very good. A little out of context of the show but very good.” And then he whisks himself away while yelling at the top of his lungs, “Now where’s that F*^ing Constable!” The Constable apparently fell asleep downstairs in the rehearsal room of the Center for the Performing Arts where he went to take a little nap. I wonder if Theodore Bikel ever tells that story? I wonder if he even remembers that story? I wonder if he even remembers me? Probably not. I’ll never forget him. 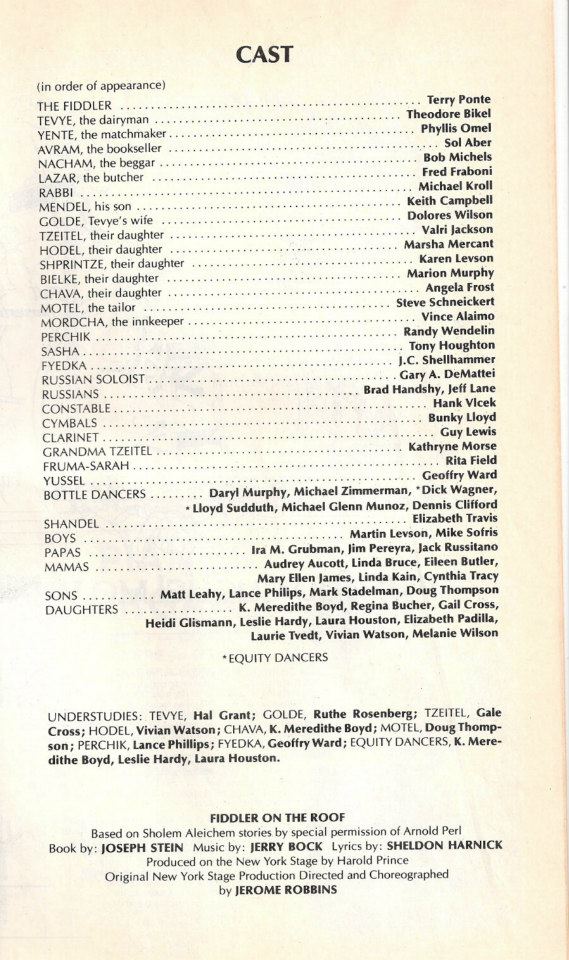