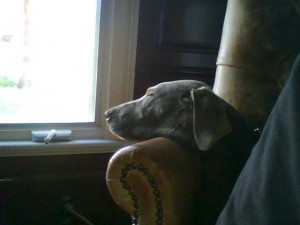 Her Name Is Rio by Gary De Mattei

The moment he knew he wasn’t dreaming was also the moment he grew more fearful about the dog. “There is a dog walking on my bed,” he thought while lying there in the dark. “We don’t have a dog. They don’t allow animals here. Only people. How’d this big dog get in our bedroom? Did I forget to lock the terrace door? If so, how is it possible for a dog to scale four flights? We have no fire escape here,” which also worried him. “Maybe it’s a dog with super powers, like Under Dog. Or worse, a mad dog, like Kujo! Maybe it’s not a dog at all. Maybe it’s a giant squirrel, like Rocky, The Flying Squirrel,” he laughed aloud and quickly turned his face in to his pillow because the animal in question just licked his nose. “Definitely a dog!” he chuckled as he continued to wipe his nose on his pillow. “Maybe this dog came in through the front door,” he wondered as he felt the panting dogs warm breath laughing in his ear, “Ha, ha, ha, ha…” “Impossible! I always lock the front door. Three times. Does this dog have a key? Three keys? The nerve of this dog to visit us at this hour! Proving, this is not my dog. My dog would call first. My dog would not need to walk around to find a warm comfortable spot. My dog would know the warmest spot was between Caryn and I, and my dog would go there immediately. While also stepping on my head. Which all dogs do regardless of where they live. Caryn! Caryn! Caryn!” he shouted in the dark and away from the dog who was now doing dog-pirouettes near his face because it too found his pillow to be the best place to lay its head, “there’s a dog on our bed and it just stepped on my head!” His shouting woke him. And the neighbors. But not Caryn, who was fast asleep dreaming of vegan sugar plums made without sugar. Now fully awake, he switched on the light to look around for the dog and saw that it was not there. He realized he’d been dreaming about the dog on his bed all along. He was sad. He turned out the light hoping to find the dog still in his dreams, on his bed, warm and asleep, next to his head.