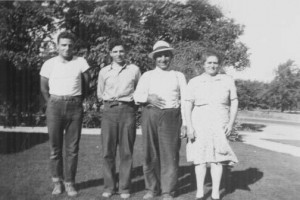 My dad joined the US Army at 17 years old, that’s him on the far left standing next to my Uncle Adolph. My grandfather, that’s him on the right standing next to my grandmother, had to sign for my Dad because he was a minor. Dad was assigned to the 37th Infantry Division (Buckeyes) during WWii and shipped overseas to the Battle of the Pacific (Leyte, Luzon, Baggio, Guadalcanal, etc). I grew up hearing stories of the bloody island battles, of how hitting one beachhead after another kinda a makes a guy hate going to the beach, especially after watching your friends never make it home. My dad carried a BAR (Browning Automatic Rifle) because as he likes to put it, “I was a big son-of-bitch.” As a child my dad was my hero, he still is. He says, “I’m no hero, Son, the heroes never came home.” If you want to read more about the 37th infantry, there’s a decent summary on Wikipedia. If you want to hear more first hand accounts of the perils of war, give my dad a call or drop by and see him. Happy Veterans Day to all Dwho served and especially my Dad.

I was not around on December 7, 1941 but my dad was and that “day of infamy” so moved him that at 17 years old, with permission from his immigrant father, he joined the Army and was immediately sent over seas to be, as he likes to put it, “a sand bag”. He didn’t return home until he was 20. My point is, unlike many other young boys, he returned home and has never let me forget those that did not. Pearl Harbor Day also reminds me that kids everywhere are still the future of this world and we adults continue to treat them as if they are sand bags. I for one want the next war to leave the kids at home and send the adults. We’ll see how fast all this insane shit stops.