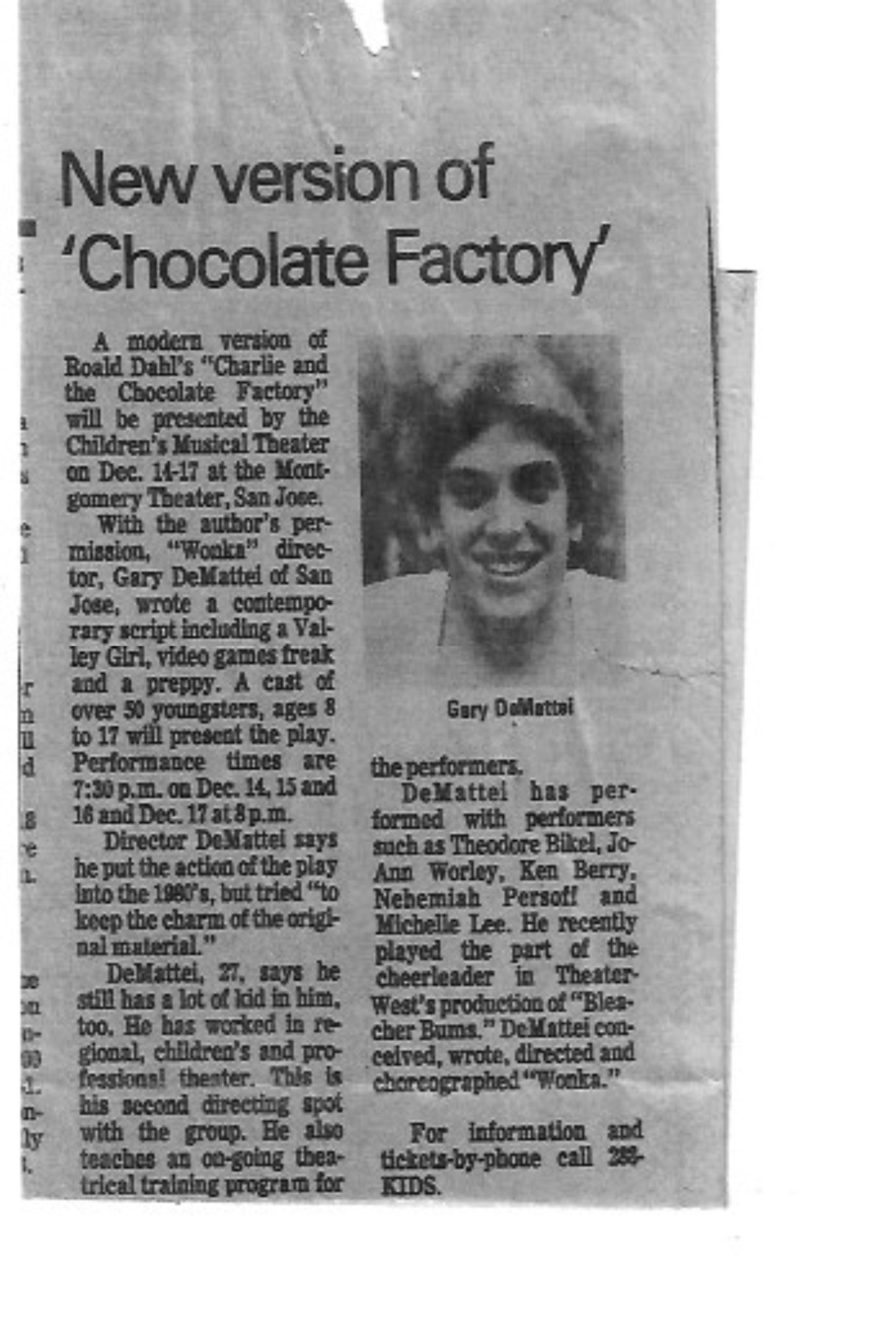 My sister Deb saved a box of memorabilia for me to go through while out here in San Jose for the summer. So, I’ve been scanning old family photos into my computer and reliving some of my life. This is an incredibly self indulgent, painful, cathartic, joyful, sad, happy, and depressing process…kind of like life in a box. I also happened on some precious show memorabilia that my mom must’ve saved (Thanks, Mommy!). I’ve often referenced losing all of my treasured theatre stuff in a baking accident. Humor is how I have been able to deal with the heartbreak and the loss. It helps me rescript. And it’s been difficult only because I was resistant to the pain of facing my own failures. And if you judge wealth by the stuff we accumulate, I am very poor. So whenever I find some of the invaluable stuff thought gone forever I have to shout it out to the treetops and I don’t care who knows it. For example, this newspaper article— another treasure saved by my sister (Thanks, Debbie), probably from my mom and dad’s collection that she is now the curator. Wonka! (exclamation point) was in the early 1980’s. A very special production featuring some incredibly talented kids, two of which taken from us way too soon: Josh Brawn and John Ignacio. Over my life I’ve adapted several stories for the stage. It was out of a sense of duty, really— some of the groups I was working for couldn’t afford rights and royalties during their lean times so I was called upon to take classic children’s stories and turn them into musicals. It didn’t matter that the groups couldn’t pay me for this, I didn’t do it for the money, I did it for the kids so that made the work priceless. Don’t get me wrong, there were perks— for example, I remember one of the stories I’d adapted came with a pair of Barbara Streisand tickets. Remember that concert at the Arena in San Jose? Babs was all in white. That especially painful memory was the beginning of the baking accident metaphor…but that’s another story, never mind, anyway. I still remember when we received the beautifully signed letter from Roald Dahl granting us permission to adapt his beloved Charlie and the Chocolate Factory. Two other adaptations from this era also come to mind and are probably out there somewhere collecting dust in people’s memorabilia boxes: Hansel And Gretel and Pippi Longstockings. They were all victims of my baking accident, too. If anyone out there has a copy of Wonka! (exclamation point), or Pippi, or Hansel and Gretel, and/or a video of any of these productions please write on my wall. Thank you.