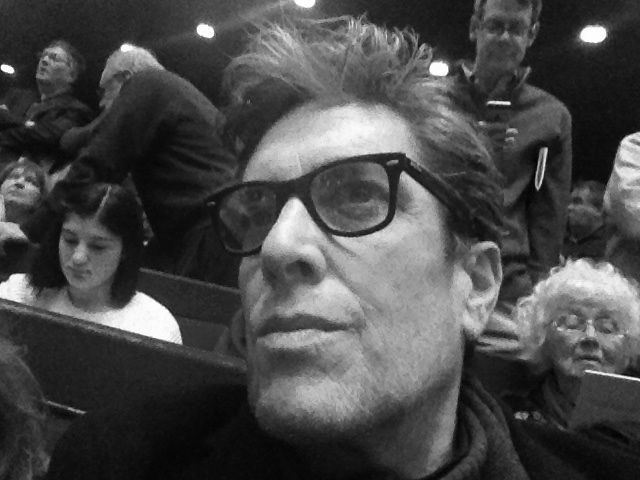 A View from the Bridge by Arthur Miller is often referred to as Greek Tragedy. The current Young Vic production directed by Ivo van Hove now running at the Lyceum Theatre on Broadway completely honors that genre. Caryn Beth Hartglass and I saw the two hour intermission-less play last night. It was the final preview performance. We sat in the “cheap seats”. These are the $55 seats that are located onstage. I can’t imagine why you’d want to sit anywhere else. From where we sat I counted three props— two wash cloths, a towel, and a cigar. And I counted one piece of furniture, a chair. Could have been more. That’s all I remember. The set is like a sterilized cube; a boxing ring without the ropes. The lighting is inspired. The music is epic. The actors are barefoot. One actor wears a pair of shoes; briefly. The shoes are worn to make a point. They do what shoes are supposed to do; they become a very powerful symbol; innocence is lost simply by putting on a pair of shoes. Adding the one pair of shoes (to me) was a stroke of genius by Mr. van Hove. There were a few other strokes. I will say no more about the strokes or the shoes; maybe. There are no other symbols with respect to costumes that would be there to depict a certain period in time but each item of clothing created character and a specific mood. No fedoras. No aprons. The same goes for dialects. No heavy Brooklyn-ese; no bad Bugs Bunny. An elegant touch of East Coast in what otherwise was American Standard executed by a mostly British cast. No Italian accents on the immigrants. Crafty; not heavy. Everything was stripped down to its essence; lean and terrifying. The weight of the world was on the human condition through Miller’s words. Any acting teacher worth their easy chair amid a classroom of folding chairs filled with terrified students will tell you: The words are the end-product of emotion; the last resort before realizing the character has no other way to go but to create sound. If the sound doesn’t help make the character’s point the character must form the sound into words. Miller’s words. To me, von Hove places the play in a morgue. The actors found the truth in a morgue last night. They brought Miller’s words back to life in a morgue last night. Actors finding the truth brought Miller back to life last night. They conjured him last night. It was a seance last night. Miller was there on stage with audience and actor last night. The actors were focused beyond themselves last night; they were focused on Miller’s words last night. There were no visible signs of acting. Only art. Stunning art. Art for humanity’s sake. Like I said, we were in the cheap seats so for us it was easy to see Miller’s ghost. Therefore, I can’t speak for the rest of the audience. I’m not sure if they saw Miller. I’m not sure if they saw those shoes either.