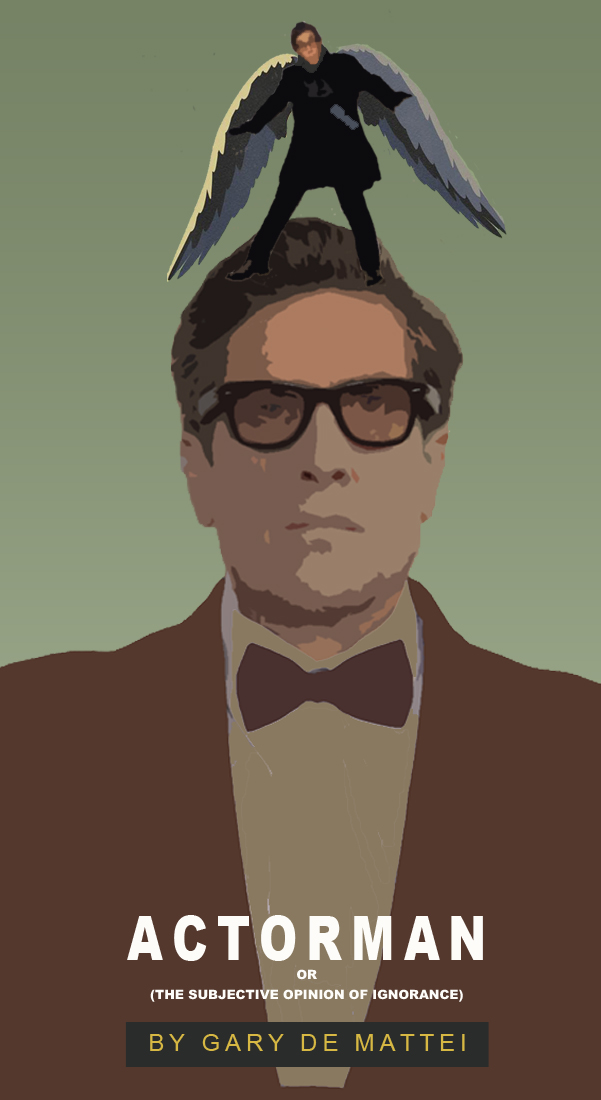 To post on the internet that Actorman is self indulgent is like a child saying, “Whatever!” when being scolded by a teacher or parent; it’s passive aggressive and meaningless. And what’s worse, it shows how one has put absolutely no thought into what one is posting. It’s stating the obvious and therefore not saying much of anything. It’s a sound bite. It’s pompous.

Whether it is portraying a sniper blowing people’s brains out in the name of freedom, or a theoretical physicist, cosmologist who is confined to his wheelchair with only his brain and his penis left working— Actorman must indulge himself in another human being’s reality during one of the worst periods of the character’s life, using Actorman’s own experiences as a roadmap to the truth.

Actorman spends his entire life studying and searching for his own voice with the objective of serving humanity. A few actors are born with the ability to inhabit a role but Actorman must spend his days and nights perfecting his own recipe for creating a character.

The common denominator for Actorman coexisting with an actor from another school of acting is to listen and react truthfully.

Actorman’s personal reality is controlled by supply and demand— There are more jobs for pretend actors than there are jobs for Actorman. Actorman must take whatever job comes along in order to survive. Therefore, Actorman is often depressed. For me, the late, David Foster Wallace described depression best:

“The so-called ‘psychotically depressed’ person who tries to kill herself doesn’t do so out of quote ‘hopelessness’ or any abstract conviction that life’s assets and debits do not square. And surely not because death seems suddenly appealing. The person in whom Its invisible agony reaches a certain unendurable level will kill herself the same way a trapped person will eventually jump from the window of a burning high-rise. Make no mistake about people who leap from burning windows. Their terror of falling from a great height is still just as great as it would be for you or me standing speculatively at the same window just checking out the view; i.e. the fear of falling remains a constant. The variable here is the other terror, the fire’s flames: when the flames get close enough, falling to death becomes the slightly less terrible of two terrors. It’s not desiring the fall; it’s terror of the flames. And yet nobody down on the sidewalk, looking up and yelling ‘Don’t!’ and ‘Hang on!’, can understand the jump. Not really. You’d have to have personally been trapped and felt flames to really understand a terror way beyond falling.”

Actorman’s mission is to trigger our collective subconscious and to make us think and feel and react and dream and remember, as one. Actorman gives us pause and the cause to look up from our phones for a brief moment to remember what brought us down there in the first place.

These days, Actorman must work harder and harder to sell his product to an audience that is getting more and more reluctant to pay for it. What we see today when we see Actorman acting is a museum piece. Like the Oscars, we view Actorman’s work on the big screen nostalgically and then we stroke our hand held device for another cat video to watch.

Actorman’s world is fading, the art he loves in himself is dying.

To say that the Academy of Motion Picture Arts and Sciences shouldn’t award best picture to a film celebrating the world of Actorman is clearly missing the point of that particular awards show.

Actorman often has contempt for his audience. Now you know why Actorman jumped out of the window of his burning building and flew away.