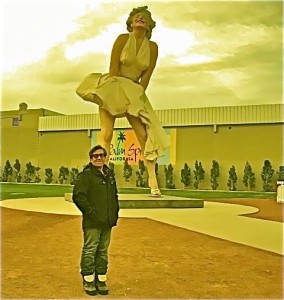 Middle-aged heavyweight woman with five o’clock shadow pushing a loaded babushka cart and wearing some kind of schmatta on her head spit at me and then mumbled something in Russian as I jogged by her. Sources tell me it was either an ancient curse or a killer recipe for borscht. Not to be outdone, an elderly woman with a walker standing motionless in the middle of the sidewalk and facing a shop window waited until I jogged behind her to break what seemed like endless wind which caused her loosely fitted house dress to billow-up above her thighs not unlike the iconic shot of Marilyn Monroe standing on the subway grate in the film, ‘The Seven Year Itch’. Needless to say, this rendered quite a different aesthetic thanks to obvious contributing factors like the elderly woman’s black corduroy slippers and the out-of-control varicosity peaking through her torn orthopedic stockings. First time I’ve been farted at while jogging. Not the first time I’ve been spat upon, or, for that matter, mistaken for Tom Ewell. That is all the time we have for tonights report from the United Soviet Socialists Republic of Forest Hills.